Darkening of the toenails from running can be an unpleasant surprise for beginners, but among runners it also means a kind of initiation, indicating that the real training has begun, not a five-minute run in the park.

According to inaccurate and unverified data, up to 15% of all runners suffer from such pseudotrauma. It seems to me that this figure is a gross underestimation if you consider only triathletes, trail runners, and marathon runners.

No one thinks to stop running at this point, because black fingernails are usually encountered already when training becomes part of life and such a little thing cannot serve as a barrier to your dose of pleasure. Anyway, if you are reading these lines, then they probably came to you too.

In total there may be four reasons.

3. Fungal diseases of the feet

Yes, all these things can cause black nails. But if you don’t sunbathe all day without sunscreen, keep your feet hygienic, and don’t drop dumbbells on your toes, then you’re only interested in the first option, which is most typical of marathon runners.

In fact, the first cause is similar to the second and, although it is more protracted in time, it is the same bruise as a normal bruise, that is, simply put, a bruise.

Fungus and melanoma, unlike trivial hematoma, have a number of features and have a greater impact on the structure and color of the skin than the nail plate.

The nail can turn dark soon after your first long run, which is not surprising when you consider that a four-hour marathon at a cadence of 180 steps per minute will take your nail 21,600 strokes from your running shoes.

From this we draw the first conclusion: a lot depends on the running shoes.

The nails suffer the most in tight running shoes and even in those that are tailored exactly to the foot size, because few beginners take into account the increase in the foot from swelling during the course of the course.

Some of this can be achieved by lacing, but in a way that does not go from extreme to extreme, and the pressure around the ankle elevation does not disrupt blood flow.

There is a worse variant – it is damage to the nail root, which is located about under the cuticle. It is quite rare, but it can lead to the fact that a normal and smooth nail will never grow back.

Some running shoes (rarely) and regular leather shoes (often) contribute to this by applying permanent pressure exactly to the root of the nail plate. Such shoes must be disposed of immediately or donated to the dog for play.

Structural peculiarities can affect as much as tight shoes. For example, a down-turned toe is a constant strain on the nail area. The same is true for elevated toes if they are resting against the rigid material of the shoe upper.

At times when a runner decides to suddenly start running from the toe instead of the heel, the feet can land improperly for long periods of time, sticking into the running surface instead of gently sinking into the metatarsal. In such cases, even competent lacing rarely helps.

Not being able to hear your own shuffling feet is one of the reasons why beginners are not recommended to run with music until they have a good mastery of safe landing technique.

Trailrunners, in theory, should be exposed to the invasion of black nails more often. After all, running conditions are entirely conducive to this, from steep descents to physical contact with trees and rocks. A study would have to be done to clarify the data.

Given that the main cause of darkened toenails is prolonged and intense strain on the nail plate, there’s no doubt that extra-long runs are the realm of such foot metamorphoses, often not very aesthetically pleasing.

Oddly enough, the main symptom of a hematoma of the nail is its darkening, as a consequence of accumulation and sintering of blood due to capillary damage.

The pressure this puts on the nerve endings causes some nagging pain, which, however, subsides with time. In experienced runners, the pain is blocked.

The main treatment most runners use is to ignore it. This is a really medically sound solution. It does, however, involve a parallel reduction in workload. However, runners don’t pay attention to this either.

The black nail may gradually replace the new, good nail as the hematoma subsides. Or even grow right under it. Another option is for the defective nail to fall off before the new nail appears.

There is also the popular advice of letting the accumulated fluid out by piercing the nail with a heated needle or a paper clip. This technique has the right to life, if after the procedure the puncture area is sterilized with external antibiotics and isolated from dirt. But in general this practice does not make much sense.

The surest way to avoid dark nails is not to run at all. As we understand, this condition is unfeasible, so it is necessary, based on the above, to choose loose, soft shoes and hone your landing technique. And on the trail – to improve descents and avoid collisions with elements of the landscape.

Some people think that applying nail polish before a marathon will somehow help prevent the formation of a bruise. That may be true for some, although there is not much of a connection.

Speaking of aesthetics, most advanced runners among men hardly care about their black nails. But girls can be terribly disgusted by such decorations of their own feet. Then, if correcting technique and changing sneakers doesn’t help, there is only the option of reducing the distance and intensity of training. 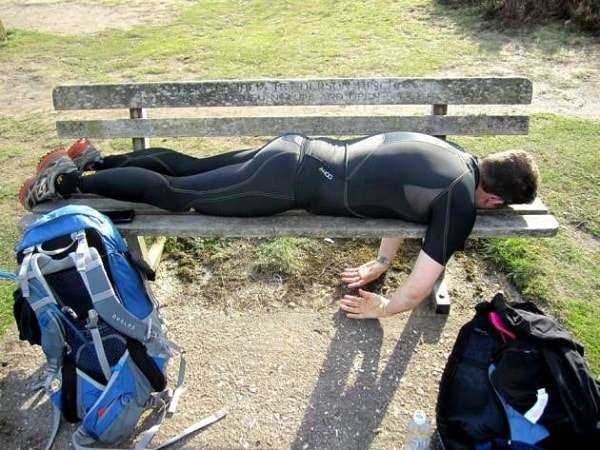