7 reasons to include water running in preparation for a marathon 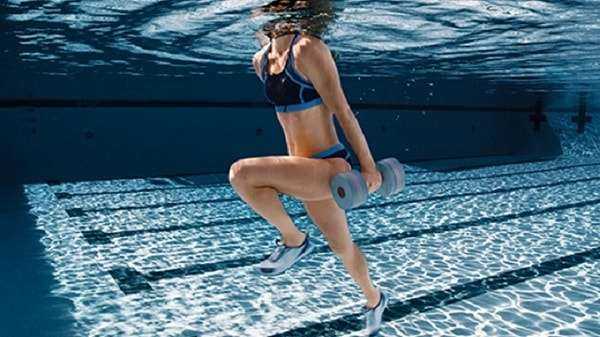 You can use the physiotherapeutic properties of the aquatic environment to improve your biomechanics and musculoskeletal health, if at all possible. Running with the whole body (or only part of the body) immersed in water is practiced as a recovery procedure after an injury. Entire complexes are even created for this purpose, which are tanks with an integrated treadmill.

Indeed, the rehabilitative effect can be terrific, but it would be wrong to limit the use of water to this framework, as water running has many positive properties for the training of the runner for any distance.

Running underwater, as recommended by sports medicine experts, may differ in some nuances, such as the depth of the athlete’s immersion and the presence/absence of forward body motion relative to the water mass.

As for the depth, I think it is clear to everyone that increasing it reduces the weight of the immersed body by up to 90% of the normal, onshore weight. Thus, the shock load on the joints is easily regulated, and such training is divided into shallow and deep water training.

You can’t do without it, because it’s a headache for many modern people, who often start running just for this reason.

Well, the average number of calories burned while jogging is 8 calories per minute (of course, everything is relative, as we have already written about). Jogging on a treadmill in a waist-deep pool increases this figure to 11 calories, as shown by a picture stolen from the Hydroworx website:

Читайте также:  Heart rate training: how the heart rate monitor can get in your way

When it comes to underwater running, when the body is fully immersed and moving progressively relative to the aquatic environment, the costs can go well over 20 calories per minute, especially at a high cadence.

Perhaps the main thing to focus on here is the maximum safety of such running, regardless of the amount of accumulated fat ballast and body weight on land. Although rumor has it that there have been rare cases of injury.

The first thing we get is constant resistance to movement, which is important for developing muscle mass, including the long “endurance” fibers.

Third, variable hydrostatic pressure will prevent edema and improve blood circulation. And if there will be thoracic pressure at full immersion up to the neck, we can also talk about an increase in lung capacity and oxygen absorption capacity.

Fourth, laminar and turbulent fluid flows have a massage effect. Not as strong as the hands of a team sports masseur, but nevertheless there is an effect.

Fifth, the amount of endorphins obtained during water-running training can be simply overwhelming.

Sixth, the temporary loss of body weight can help to break down running and landing techniques, which is difficult to do under weight-bearing conditions. Positive changes in novice runners have been observed, expressed as a tendency to increase the angle of hip extension during the running stride and to catch the shin to the buttocks after the foot is lifted off the surface.

Seventh, it saves the mileage of your favorite running shoes.

Where to run underwater

Of course, there are specialized places for training or water therapy with bottom mechanical treadmills. But purposefully go there only enthusiastic sports performance runners, as well as triathletes, who have this function in the pool, where they train. However, more often they choose an underwater exercise bike.

For everyone else, it is advisable to devote part of the summer to training in open bodies of water. Of course, in this case we mean progressive running on the bottom of lakes, seas and rivers.

In terms of adapting your body to frequently changing conditions (depth, topography and bottom composition), this is an even more effective (but slightly less safe) way to increase your performance. On untested bodies of water, we recommend wearing something like Five Fingers to avoid damaging your feet.

Another option for light training is to work with the legs without contact with the bottom, that is, in a state of full buoyancy. Considering that the buoyancy of runners is usually lower than that of swimmers, you can use flotation devices, which can include children’s inflatable armbands, circles, ducks and other gadgets with a density below 1 g/cm3.