Walking is part of trailrunning

For many runners who came to trail running from the city pavement, switching from running to walking becomes a difficult decision. However, it soon becomes clear that occasionally walking is the optimal solution.

It’s not even about distances that exceed standard marathons. There are also mini-trails with courses starting from 10 km, and in which you still sometimes have to switch to walking. Walking is simply the most efficient way to get around at low speeds. Whereas running is only effective at high speeds.

As we all know, the stumbling block in trail running is the gradient, or more specifically, the uphill gradient. The steeper the gradient, the less efficient the running becomes due to physical laws involving the effects of gravity.

Instead of a parabolic arc with a large vertical component, which will form a jump when running uphill, it is more appropriate to switch to a lower gear and save fuel. As well as to use the cardiovascular system in a sparing mode.

It’s up to you to decide when to switch from running to stepping, but if everyone around you is walking and you’re running in the middle of the course, it’s something to think about. Even elite ultramarathoners on moderately difficult trails occasionally switch to stepping. Some just need to calm their heartbeat and get back into their rhythm, while others speed up only on flat sections and downhill sections.

Читайте также:  Rest and recovery after running. The best tools

To engage the gluteal muscles in active work, you can tilt the body slightly, shifting the center of gravity slightly forward in front of the pelvis. But be careful that your back stays straight. For any runner, training the gluteal muscles is an important element of training, and for trail runners and skyrunners especially. However, the balance of all leg and cortex muscle groups is important here.

When walking you should not take long steps, you should take short steps with a steady cadence, otherwise much more energy will be consumed, and the muscles that are not needed at the moment will be put into action.

Trailrunning poles are an invaluable aid, without which most of the world’s trails would be difficult. If there are no poles, on good gradients there is a temptation to use your knees as a fulcrum for your hands, which will inevitably engage the quadriceps rather than the glutes.

There are no special poles for trail running, although many manufacturers try to present some models as such. Nordic walking poles are the same thing, it’s just that everyone knows about Nordic walking and only enthusiastic runners know about trail running.

The difference between the poles that grannies walk in the park with and those that professional ultramarathoners run with is only in weight. The weight is gained by the material. It’s just like bicycle frames and forksets here: no-name aluminum is cheaper, top-of-the-line carbon fiber is more expensive.

You may also like
Running on the spot: plus, cons and program
For those who want to be healthy and in good shape
0255 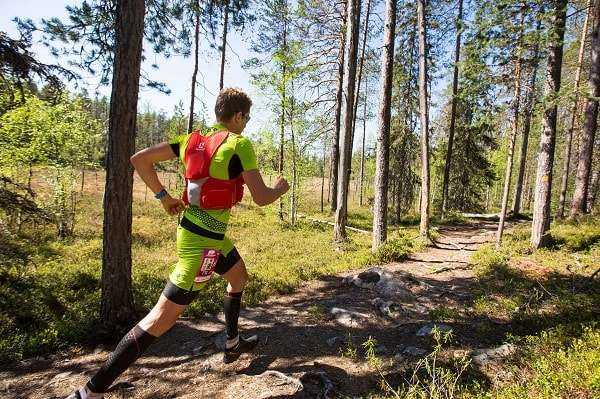