A marathon with no training 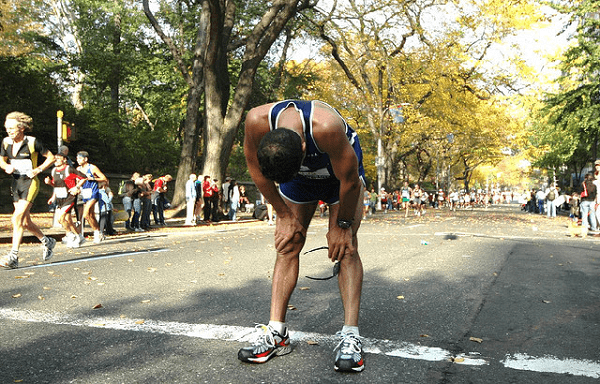 First of all, there really is a chance to run 42 km. Even if you have never run long distances before. And even if you’re not a sprinter, a cyclist, or an athlete at all. But the less involved you are in cycling sports, the closer to zero the chance will be.

To overcome a marathon without preparation will be a very difficult task. It is implied that the movement will be exactly running, without switching to a step, because otherwise any healthy person can cover such a distance in a day.

Secondly, without going into thinking about “why you need it,” we can say in advance that there will be a huge number of “walls” – psychophysical barriers – much more than any amateur marathon runner.

Cramps can be a standard problem, after which at some point the nervous system and muscles may start to fail. Therefore, it is quite likely that the legs will tilt, up to and including falling on the running surface. Every such hiccup or forced stop will not add strength at all. Rather, on the contrary, it will knock the body out of tempo, making the return to dynamic movement more and more difficult each time.

Barring the likelihood that the marathon will be run in Olympic time – around 2 or so hours – you will have to somehow replenish your energy reserves and drink water. After all, you’re likely to spend at least 4 or even 5 hours of your time on this insane and dangerous endeavor without any running training. So the amount of glycogen in your muscles by the middle of the distance will be at an extremely low level.

Читайте также:  Running in Winter is the Best Way to Lose Weight

This is where nutrition can be a problem. The fact is that eating while running is a separate training item for many runners, so that the body doesn’t resist doing extra work to assimilate the energetic goodies. And the stomach should be able to be loyal to any food that falls into it, despite the overall stressful state.

If you can eat, the second problem may be with the circulation of water in the body. Especially on a hot day. The process of fluid circulation, which involves the mechanism of sweating, is also subject to training. Because of the body’s inability to assimilate water quickly, the blood can become very thick, impairing oxygen transport. Worse, it puts a heavy strain on the cardiovascular system. Sweating will slow down and eventually heat exchange will decrease, leading to overheating and heat stroke.

In fact, experienced and fast runners don’t have to eat and drink for 42 kilometers if there is no heat. It all depends on the time spent on the course, and advanced athletes will have much less than the case in question. The option of running without water and food is not the best and, in fact, it is quite harmful. However, they will cover the distance without much trouble, although a little slower than usual.

If you managed to drink and eat, and your muscles still allow you to keep moving, then during the running process, most of which is likely to pass with absolute discomfort, pain in the joints and ligaments may gradually (or abruptly) arise. The first signals will come from the knees and plantar fascia, then from the nerve endings of the periosteum of the shin and Achilles. However, the order is very tentative, it can hurt all at once.

Читайте также:  Fartlek: the training program as a philosophy

There may be sharp pain signals in the most vulnerable and susceptible areas, preventing you from continuing running or even standing on your feet. It is not certain that this will be a sign of a formed injury, but the body will quite clearly let you know that the line has been reached. The body physically will not allow it to break down to the end, disabling the owner’s corresponding functionality.

All these perturbations, led by dehydration, can lead to irreversible changes in the nervous system or at least a long and difficult recovery. While injuries may well occur, it’s more likely that a runner’s demise will occur sooner. After all, virtually all running injuries are the result of prolonged excessive strain on an untrained musculoskeletal system. However, ligament inflammations are not excluded.

All of the above will be complicated by several important nuances – a complete lack of technique of running, knowledge of their aerobic capacity and metabolic processes, as well as the banal inexperience.

The chance (albeit minimal) of a person running a marathon without any training is there. But the damage to health is likely to be serious. And the chance that a person will take up running after such experiments tends to zero at all.