Trail running: why we need off-roading 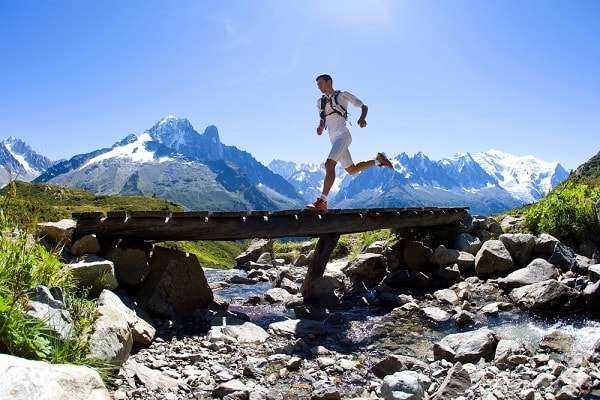 About 30% of classic urban marathon runners started their athletic journey with trail running. They were the ones who ran in the park near their home. Only as the distances increased did they have to move to the pavement, where most of them do most of their training.

Trail running is originally about running on trails, no matter where they are. In fact, the main requirement for such runs is maximum proximity to nature and complete exclusion of asphalt.

Today, trail running includes all kinds of off-road running and even skyrunning – exclusively mountain running, which has no trails in any sense of the word. But it has solid drops in elevation and a high probability that the beginner will walk most of the distance (if not all). In this case, the legs will hurt, as after squatting with a barbell.

By the way, the last thing that can be recommended to beginner runners is to train in difficult terrain. It is good to start running in the park on soft (compared to asphalt) ground when there is no safe technique. But training with ascents, descents and a variety of obstacles in the form of roots and rocks is almost guaranteed to injure the unprepared musculoskeletal system.

You could say that trail running is the next step in the evolution of the classic marathoner. No, of course, there are those who spend all their life on the pavement, continuously participating in all the largest marathons of the planet. But there are also those who get bored with it and have a desire for something new and different.

Something new and different in this case is a craving for solitude with nature, a distraction from the noisy cities and large crowds of their inhabitants. For most trail runners, their hobby is, first of all, a kind of meditation and fresh air, and then everything else inherent in the sport.

Regular running in the city on the pavement can completely relieve stress and tension, but trail running does this before you even start running. The very fact of going out into nature is already a cure for a city dweller. Needless to say, that after a good and beautiful trail, all life’s problems just don’t have any effect on you… And in general they cease to seem as such.

Distance in nature running is no different from the urban classics: there is a 5 km and 10 km, there is also a marathon – 42 km. But, unlike the asphalt, the marathon distance of 42 kilometers is the average distance in trail running. And ultramarathons, that is, anything over 42 kilometers, up to 100-kilometer and 100-mile super marathons, attract the most attention.

Today, ultramarathons and trail running have become synonymous because ultras are held exclusively in natural conditions, often in the wild. It can be the desert, the Canadian and Siberian forests, the jungle or the polar regions.

Despite the fact that the number of people who want to run on trails increases every year, the total number of athletes is still several times less than on classic marathons. And given the specificity and complexity of the course, at some point you may find yourself running all alone. And the nearest athletes are out of sight, both behind and in front of you.

In fact, this factor is not negative. Like everything else, the loss of flexibility due to running is an adaptive process that plays a positive role and helps you achieve better results.

When you decide to leave the asphalt to run in nature, you should also be ready to add a new outfit to your closet. The requirements depend on the nature of the terrain, the surface and, of course, the weather conditions. 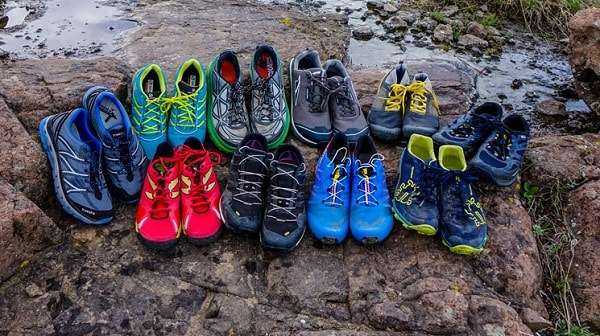 Theoretically, there is no need to buy specialized running shoes from the leading manufacturers of this direction, such as Salomon, La Sportiva or Inov-8. You can do with an inexpensive model from Decathlon, for example Kalenji Kiprun Long (former Ekiden Active Trail). These are lightweight sneakers for uncomplicated trails without rocks and roots. They are quite durable and comfortable, with a tenacious and not too stiff sole.

All the most famous manufacturers of running shoes (Mizuno, Asics, etc.) necessarily have a separate line of trail running. So it is quite possible to choose the right ones for your foot and your wallet.

Buying something serious and spiky makes no sense, because the first training should take place in more or less easy conditions on a small gradient, without sand, mud and rocks.

Many sellers in sports shoe stores for some reason think that trail running shoes must be waterproof, equipped with a membrane fabric, such as Gore-Tex (Salomon has its own development – Climashield) and other features of trekking and mountaineering boots. This is absolutely not true. Probably the sellers themselves do not run or they need to sell you something more expensive and with a membrane.

There should be no gortex or water-resistant fabrics in summer trail running shoes. The main requirement for them is to dry as quickly as possible after hitting the next puddle or stream. No membrane is able to ensure quick removal of moisture from the body. Especially in the amount that you will have in your shoes after the ford.

You can probably guess that running with a constant amount of moisture around your feet is fraught with severe skin damage. The only place where the use of membrane fabrics is justified is the winter polar trail.

Many athletes, fans of minimalism, even run steep trails in Five Fingers barefoot sneakers, but this is fanaticism.

Outerwear depends on individual preferences, in many respects it does not differ from the usual running. Another thing is that you often have to take a windbreaker with you on the trail, as well as a hat, gloves, flasks with water, nutrition bars and other small things. Therefore, it’s important to choose the right element of equipment – a backpack. Fortunately, today there are no problems with the choice.

Читайте также:  How to become an ultramarathon runner 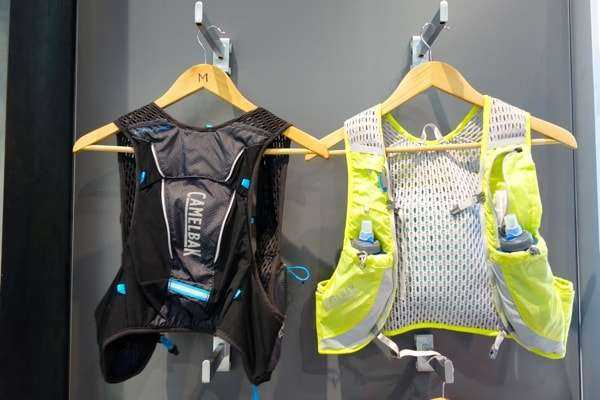 Well-publicized manufacturers of backpacks set very high prices for their products. But in China you can find great options several times cheaper. At the same time the quality of materials and sewing is quite high, which I can personally confirm, having tested this version of Tanluhu: 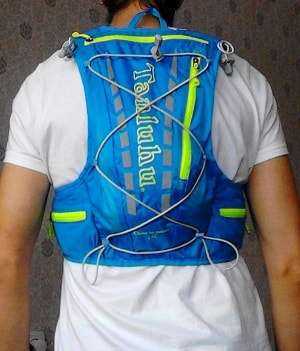 This backpack was very comfortable, lightweight and has already gone through several washings, without losing any of its look and structure.

The distinguishing features of running backpacks are maximum lightness, the presence of a drinking system and a vest-like cut. In general, they are not far from cycling backpacks, both in design and requirements. They can have extra bulky pockets on the sides for nutrition and trivia and on the straps for tanks.

Some people make do with a waist bag with pockets for canteens. But when there is not enough liquid, it becomes problematic to take extra water with you. Part of the equipment is difficult to stow, and it is convenient to carry only a very small weight on the belt. But waist bags for running are often used in addition to a backpack on long and hot ultramarathons.

But all this applies to ultramarathons. You can run shorter distances by taking water and food from the buffets on the route, without taking anything at all.

Perhaps the most important requirement for trailrunning gear is lightness. Sometimes even at the expense of functionality. After all, dropping every hundred grams is a weighty argument, especially when it comes to ultramarathon or skyrunning.

Approximately half of the athletes in mountain races prefer to have trekking poles with them. Of course, the lightest option is chosen, the most compact in the folded position, allowing the set to be attached to the ties or to a special fastener on the backpack when crossing simple gentle sections. 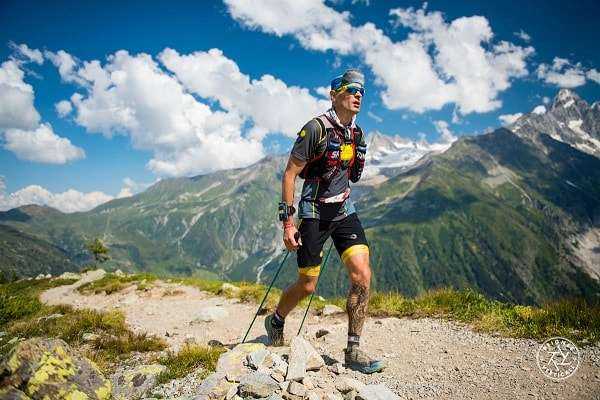 Those who can afford it permanently move closer to nature and to their favorite trails, including the mountains. They almost never return to the tarmac again, training and performing exclusively off-road. That’s what Anton Krupichka, the most famous and recognizable living brand of ultratrail, does. But a larger percentage of athletes choose the middle way, running asphalt marathons and occasionally taking to the trail.

Before you start training on trails that have at least some unevenness, it is better to have a run on a flat surface with good technique. And even with a solid marathoner’s record, you should move to hills and mountains about the same way you started your first runs. Very carefully increase the load, in which the main contribution will now be made by the gradient of the climbs.

It is clear that to run 10 km on rough terrain is not the same as to run them on smooth asphalt – the load is incomparably more. The main problem here is rapid muscle fatigue, which can quickly lead to injuries.

Other weaknesses are the Achilles tendon, which has a hard time on steep climbs, and the knees, suffering on improper descents. The rest of the problems can be found on all kinds of obstacles and bumps, threatening purely technical damage, including classic dislocations.

The races are held absolutely everywhere, including the Sahara with its most difficult desert Marathon des Sables. It goes beyond not only classic running, but also beyond ordinary trail running, because its length is 250 km. The participants cover this distance in six days.

About a thousand people take part in the sand races, with a quota of participants for different countries. The organizers provide transfer from Paris to the venue of the race. The course changes every year and consists of six stages of varying length.

The organizers also regulate the issuance of water to participants. There are 12 liters per day: in the morning, on the course and in the evening. Participants provide their own food and carry it with them. Equipment carried in a backpack is also controlled: sleeping bag, whistle, flares, compass, signal mirror, food and salt tablets.

However, the younger Ultra Trail du Mont Blanc – UTMB – has become an icon of trail running. Unlike classic asphalt marathons, it is not enough to apply and pay the entry fee for world-class trails.

In particular, in order to run 170 km around Mont Blanc as an official team, you must first score 15 points in other UTMB-certified events. And there must be no more than three of them (in two years). But this will not give you a guarantee of participation: it is up to the lot.

This is done primarily so as not to lower the UTMB rating, but also to increase safety and not to “clog” the start with random people who will withdraw after 20 km.

There is a simpler version, the Marathon Du Mont-Blanc 80K. However, it is simpler only in relation to the Sahara Desert or the full-scale UTMB.

The other few hundred races are held wherever there is beauty, plenty of nature, and few people, including, of course, Scandinavia, Russia (roughly from Karelia to Kamchatka), and even Tibet. Most of them are as easy to take part in as an ordinary international marathon.

RTRA is a very recent creation, in March 2017, so everything is in the process of development, including the official website. You can read more about the Association’s purpose, founders and plans in Trail-Run magazine.